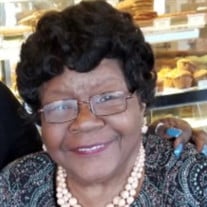 Annie (Jean) Williams was born August 3, 1942 in Montgomery, Alabama, to the parentage of Luther and Frances Fisher. She departed this life on Monday, November 29, 2021, at University Hospital in Cincinnati Ohio. Upon moving to Cincinnati, she attended Taft High School in the West end. Annie met and married the love of her life, Eddie L Williams, and to this union four children were born. Mr. Williams preceded her in death in 2013, after over 50 years of marriage. Annie, affectionately known as “Jean,” was a devoted wife, mother and grandmother. While she occasionally worked as a nurse assistant, her chief vocation was that of a homemaker. Her heart was in the concern for her family, and she could always be found in her ultimate sanctuary, her kitchen! She was a marvelous cook and kept everyone well fed and was most welcoming to anyone at her table! In her later years, she maintained that same effervescent spirit and enjoyed every family celebration that was given for her or any of her grandchildren, especially. Her beauty was quiet but radiant. We will miss that infectious “little” laugh of hers. One of God’s angels, sent to earth, has returned. She received instructions in the Catholic Church and often spoke of the appreciation for that faith. Annie leaves, not to mourn but to cherish her legacy, her four children: Regina Williams, Deborah Holloway, Eddie (Jewell) Williams, Jr., and Darryl Williams. Her eight grandchildren: Deonta, Clarence, Eric, Keisha, Darryl Jr, Ashlee, Erica and Kameran and thirteen great-grandchildren. Three sisters-in-law: Barbara Adams of Detroit Mi, Lestine Brooks and Johnny Mae Fisher of Cincinnati, three brothers-in-law: Thomas Williams of Toledo, Ohio, Melvin Williams and Anthony Daniel of Cincinnati. She also leaves a host of nieces, nephews and several to whom she was like a “second mother”.

Annie (Jean) Williams was born August 3, 1942 in Montgomery, Alabama, to the parentage of Luther and Frances Fisher. She departed this life on Monday, November 29, 2021, at University Hospital in Cincinnati Ohio. Upon moving to Cincinnati,... View Obituary & Service Information

The family of Annie Williams created this Life Tributes page to make it easy to share your memories.

Send flowers to the Williams family.