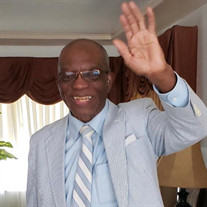 Dad was a brave Christian soldier, who had a passion for living and had a witty sense of humor. Despite how grim things were during the last few days of his life, Dad acted like he was just resting up for one of his much anticipated fishing trips. All smiles and laughter, even when lapsing in and out of consciousness. He passed away at home, with family sitting on his bed. He was beloved, as a Father and Grandfather. Dad was born in Jackson, Georgia, on November 18, 1929. His parents were John Louis and Martha (Moreland) Barber. Dad, his Mom and her siblings, later migrated to Cincinnati in the wake of the Great Depression to seek better living opportunities. Dad was a hard worker and supplemented the family income by shining shoes and working for Fanny Farmer’s Candies during the day and finishing high school at night. Dad wanted to pursue studies to learn to read blueprints, but was drafted in the Army in 1951. Dad served as a Corporal in the Korean War until his honorable discharge in 1953. Soon thereafter, he married Barbara Jane Barber, and they had 4 children: Barbara, Marchelle, John, and Johnathan. In addition, Dad had 3 Grandchildren: Annalise and Jaden, and Maya who passed away on August 8, 2005. After getting laid off at General Electric, Dad went to work for the U.S. Post Office, where he retired in the 1980’s. But along with his then wife Barbara, in order to make sure that their children had best possible chance for quality education and homelife, Dad worked 2nd and 3rd jobs as janitor for Cincinnati Public Schools and at Sears & Roebucks on Reading Road. Dad has been a faithful member of Zion Baptist Church since the 1950’s. Whenever Martin Luther King came to the church to preach for evening service, Dad was there with family, about 3 pew rows back. Dad taught Sunday School classes for decades, alongside his decades of work on Zion’s Usher Board. On February 12, 1989, Dad was ordained as a Deacon at Zion; he is the last surviving member from this 1989 class of deacons. Dad was an avid traveler. He traveled with friends to Jamaica, the Bahamas, Hawaii, and enjoyed cruises to Alaska, the Virgin Islands, the Cayman Islands, and much more. Dad was a perfectionist; a stickler for routine. Rarely slept late, enjoying gospel and jazz music while showering and eating breakfast, and still folded all his linen ‘army-style.’ The COVID 19 pandemic upended Dad’s daily routine of meeting with friends at the Madisonville Recreational Center for card games and snacks, as well as his weekly Bible study at Zion. So, Dad decided to resume a hobby from his past: building model airplanes with balsa wood. Dad was always somewhat of a compulsive, obsessive, and he immersed himself into building these model airplanes, sometimes pulling all-nighters just because he enjoyed the hobby so much. Despite having had cancer with radiation therapy, 3-4 strokes, a brain bleed, flatlining twice, a leaky heart valve, kidney and congestive heart failure, Dad was a very mobile, happy 90 year old, kid at heart. His primary care doctor, Dr. Joseph Dagenbach, deserves a ton of credit for having helped Dad stay healthy and happy for so long: he always visited Dad, every day, every time Dad was ever in the hospital. Likewise, Dad’s Cardiologist, Dr. Richard Henthorn at Mercy, has been with us for decades, and always treated Dad like family. The Christ Hospital physicians and staff were amazing during Dad’s final hospital stays. Once Dad decided to do hospice, the staff from Heartland Hospice were all wonderful as well. Joan Long with Counsel on Aging, time and time again, over the past decades, went way beyond the call of duty in supplementing caregiving assistance which helped Dad maintain his independence in his own home for as long as was safely possible. During Dad’s last illness, many friends phoned him: some offered him cards and conversation to cheer him up; some prayed with him; and a couple sang to him. Willie White continued the property upkeep for us; neighbors kept a watch on things. The family is very grateful for everything everyone did, named and unnamed. Thank you all. Please note: parallel to the live service, we have planned to stream the service live. The link for the stream will be made available for anyone who desires to attend in that manner, and all you would need to do is contact one of the family members for the link. Thank you. https://www.youtube.com/watch?v=EqYgcj0cxLg&feature=youtu.be

Dad was a brave Christian soldier, who had a passion for living and had a witty sense of humor. Despite how grim things were during the last few days of his life, Dad acted like he was just resting up for one of his much anticipated fishing... View Obituary & Service Information

The family of John Louis Barber Sr. created this Life Tributes page to make it easy to share your memories.

Dad was a brave Christian soldier, who had a passion for living...

Send flowers to the Barber family.