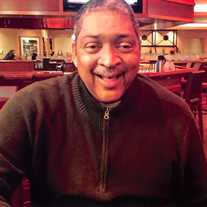 Joseph S. Charlton, age 69, went home to be with the Lord unexpectedly on Thursday, February 25th, 2021 at his residence. Joseph was born on December 19, 1951 in Cincinnati, OH to the late Alice "Queen" Smith and Edward Charlton. Both parents preceded him in death, along with his aunt, Helen J Smith. Joseph went to St Joseph Catholic School and was a graduate of Roger Bacon High School. He attended Xavier University, and Western Michigan University and obtained two Bachelor's degrees and a Masters degree. Joseph spent nearly 40 years in the public sector. He was Assistant City Manager in Ypsilanti, MI, City Manager in Muskegon Heights, MI, Burrough Administrator in Norristown, PA, Assistant City Manager, Manager of Public Safety, Assistant Manager of Public Services and Manager of NOD in Cincinnati OH, before retiring in January, 2012 Joseph was an avid reader, and encouraged anyone around him to read, get an education and save money. He took pride in educating people about the importance of saving for retirement and saving for emergencies. He participated in Dave Ramsey's Total Money Makeover classes at Crossroads Church in Oakley. After retiring, Joseph started his own business named "Ability to Gain Wealth", where he would teach people how to build a budget, save for retirement and get out of debt. In his leisure time, you could catch him at one of his favorite restaurants, or at the movie theater. He took enjoyment in attending sporting events for his children and grandchildren. He loved it when he was able to take his grandaughter to her swimming lessons. Joseph loved life, but above all, he loved the Lord, and he loved his family. He was a member of St Joseph Catholic Church in Cincinnati, OH for many years, was a member of the choir, and helped teach bible study class. He was an avid fan of Cincinnati Reds baseball, Xavier Musketeers basketball, Cincinnati Bengals football, and Ohio State football, of which he LOVED to battle his daughters who are Michigan fans. He also took great enjoyment in torturing his family with his news programs (especially 60 minutes and MSNBC), his sports programs, his "trying" to cook, his "trying" to sing, laughing like the Count from Sesame Street, and bragging to his children that he was retired and didn't have to wake up so early in the morning. His love, laughter, smile, tomaine tabernacle cooking and off-key singing will be dearly missed by all who know and love him. Joseph is survived by his loving wife of nearly 5 years, Patricia Charlton, his 3 daughters, Tiffany Charlton (Maurice) of OH, Keyanna Charlton (Zack) of TN, and Cherise Charlton of OH, 1 son, Aaron Charlton of OH, 1 step-daughter, Christol Neal, 4 sisters-in-law, Tracie Cole, Linda Whatley, Tonya Whatley and Rosemary Taylor, 3 brothers-in-law, Vernon Housworth, Michael Walker and Rod Stewart, 8 grandchildren - Kayla, Kyndall, Kennedy, Samarah, Christopher, Tre', Roman and Langston, 4 grand fur babies - Stitch, Garfield, Sassy and Thumper, 6 great grandchildren - Anastasia, Armond-Alexander, Ciyanah, Mikel, Jamari and Xavion, mother of his children, Lawanda Charlton, best friends Ivory Morris and Bruce Menefield, special friend Dr. Gordon Yun, and a host of other relatives and friends. Visitation for Joseph will be from 9:30am-11am on Saturday, March 6th, at St Joseph Catholic Church, 745 Ezzard Charles Dr, Cincinnati, OH 45203. Funeral will follow the visitation at 11am. Masks are required. In lieu of flowers, memorial contributions can be made at any Fifth-Third bank.

Joseph S. Charlton, age 69, went home to be with the Lord unexpectedly on Thursday, February 25th, 2021 at his residence. Joseph was born on December 19, 1951 in Cincinnati, OH to the late Alice "Queen" Smith and Edward Charlton. Both parents... View Obituary & Service Information

The family of Joseph Charlton created this Life Tributes page to make it easy to share your memories.

Joseph S. Charlton, age 69, went home to be with the Lord unexpectedly...

Send flowers to the Charlton family.