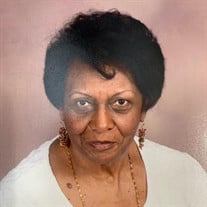 Marva Inez Wilson was born on September 8, 1937 to the union of Professor Andrew J. Johnson and Alice Ethel (nee Banks) Johnson. She was the youngest of 11 children. Marva departed this life on January 27, 2021 at Jewish Hospital in Cincinnati, Ohio. She was educated in the Cincinnati Public School System and graduated from Withrow High School in 1955. She met and was united in holy matrimony to Walter Collins on June 5, 1956 and six children were born to that union. She began her career at the University of Cincinnati Hospital working in the accounting department and retired after 30 years of dedicated service. Marva accepted Christ on November 3, 1946, under the leadership of Rev. Wilbur Allen Page of the Union Baptist Church later moving her membership to the New Prospect Baptist Church. While a member of Union Baptist Church, she served faithfully as the Church Clerk, a Trustee, Women’s Day Chairperson, Dorcas Missionary Circle and on the Welcoming Committee just to name a few. As a devoted member of New Prospect Baptist Church Marva faithfully attended noonday Bible Study and New Prospect Missionary Ministry until her death. Marva was involved in outside organizations such as Church Women United, Bible Study Fellowship, the Royal Twelve Club and The Red Hatters. On July 2, 1982 she was united in holy matrimony to Rufus A. Wilson, Sr. (Deceased). She was a loving mother to Linda J. Wilson and Rufus A. Wilson, Jr. Marva (Mema to her family), loved to cook and was an excellent baker. Most times you would find Mema watching the game show channel and working crossword puzzles. She leaves to cherish her memory, her children: Walter Michael Collins, Sr. (Renae), Nashville, TN, Eric H. Collins (Alem) Richmond, TX, Marian A. Ferguson (Clinton), Lynn D. Dunn, Dr. Terrance A. Collins (Jacqueline) Bowie MD and Darren V. Collins, Nashville, TN. Two sisters Beatrice Jenkins and Martha White (Ernest), 15 grandchildren and 13 great-grandchildren and a host of family and friends.

Marva Inez Wilson was born on September 8, 1937 to the union of Professor Andrew J. Johnson and Alice Ethel (nee Banks) Johnson. She was the youngest of 11 children. Marva departed this life on January 27, 2021 at Jewish Hospital in Cincinnati,... View Obituary & Service Information

The family of Marva Wilson created this Life Tributes page to make it easy to share your memories.

Send flowers to the Wilson family.