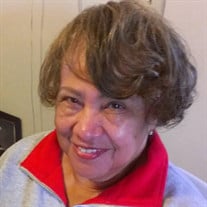 Mary Jo Gooden was born on January 29, 1940, in Talladega, Alabama. She was the second oldest of seven children born to the union of Samuel Sr. and Josephine Pounds. After receiving an associate degree from Huntsville A&M College in Huntsville, Alabama, Mary Jo and her husband Charles moved to Ohio to start a new life. This union created four children, thirteen grandchildren, fourteen great-grandchildren, and one great-great grandchild. She worked for AVON, and upon leaving AVON, she continued to work caring for her grandchildren. She loved her family very much, and they remained the center of her life. Mary Jo’s love was also felt by her brothers, sisters and many other family members and friends. At an early age, Mary Jo accepted Christ and was baptized at Mount Zion AME Church, Talladega, Alabama. One of her favorite things to do was to sing in the choir. In her married life, Mary Jo became a member of Bethel Baptist Church, Hamilton, Ohio, where she was a Sunday School teacher. Later in life, Mary Jo joined Mt. Zion Baptist Church, Woodlawn, Ohio where she remained a faithful member. For fun and relaxation Mary Jo would crochet, sew, and play with number games. As a matter of fact, one of her favorite Christmas gifts was a sewing machine. She sewed and crocheted some beautiful items, and every so often, her creations would make you laugh. On Monday, December 6, 2021, Mary Jo, mama, departed this life. She is preceded in death by her parents, Samuel Sr. and Josephine, three brothers, Samuel Jr, Johnny, Robert Lee, and a son, Bobby Charles. Those left to cherish loving memories, warm thoughts, and a giving heart include her husband, Charles M. Gooden; her loving children, Harry of Zepyrhills, FL; Regina of Hamilton, OH; Kim (Quintero) of Fairfield, OH; thirteen grandchildren, Charles Harry, Shannon, Shaquetta, Angela, Blake, Desmara, Brandon, Kiara, Raven, Blair, Denaja, Kiasierra, Brent; fourteen great-grandchildren, and 1 great-great grandchild; one brother, Larry Pounds; two sisters, Anita King (James), and Feldener Howard (John); one sister-in law, Iola Pounds; and a host of nieces, nephews, other relatives, friends, and the Mt. Zion Church family.

Mary Jo Gooden was born on January 29, 1940, in Talladega, Alabama. She was the second oldest of seven children born to the union of Samuel Sr. and Josephine Pounds. After receiving an associate degree from Huntsville A&M College in Huntsville,... View Obituary & Service Information

The family of Mary Jo Gooden created this Life Tributes page to make it easy to share your memories.

Send flowers to the Gooden family.