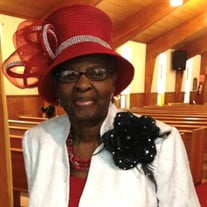 Mildred “Mil” McHenry left this earthly realm and returned to her Lord on Saturday December 4th, 2021 after 96 joyful years of life. Mildred was the 9th of 13 children born to Bishop Malachi Curtis Johnson Sr. and Luella Johnson on April 10, 1925 in Cincinnati, Ohio. Mildreds' family set out on the path of the Great Migration for Chicago, Illinois. When the family reached Cincinnati, Ohio (the most southern part of the north, indicating freedom and new life) the Lord spoke to the Patriarch to settle in Cincinnati and here they remained till this very day. She was the second of her parents' children born here in Cincinnati, Ohio. Mildred was a fiery young girl and remained so throughout her life. As an active member of The Avondale Community Council, she was a well known activist in her community; fighting for the safety of women and disenfranchised people, even gracing the pages of the Cincinnati Enquirer.  Mildred loved the Lord and served Him her whole life. She served under her father and Bishop at Cutter Street Church of God in Christ which later became Rescue Temple Church of God in Christ upon relocation. After he returned to his Lord, she served under the leadership of her brother, M.C. Johnson Jr., who succeeded her father as the Pastor of Rescue Temple Church of God in Christ. She then went on to help in the ministry of her nephew Elmer Brown, Pastor of Pure Gospel Church of God in Christ. She later returned to Rescue Temple Church of God in Christ, where she was appointed to the seat of Church Mother, to serve under the leadership of her dear brother and best friend Samuel Johnson Sr. and continued serving as her health allowed.  Mildred will be remembered for being no nonsense, the British accent she often spoke in and her favorite phrase “Truly, Truly!”, often exclaimed in worship services when in agreement with the preacher. Mildred is preceded in death by her parents, Malachi and Luella Johnson and all but one of her siblings. Her first husband Franklin Lee Wesley Pool Sr. and two of their children also preceded her in death, Franklin “Frankie” Lee Wesley Pool Jr. and Dalphine Foster. Mil later married George “Skip” McHenry, who also preceded her in death. And, Dalphine’s son, Charles Wesley Foster, also precedes her in death. Mildred leaves many to cherish her memory.  Among them are her eldest daughter, Janet Evans, whom she affectionately called her Million Dollar Winner and her Rock of Gibraltar and her baby sister Etta Mae Avant (James Avant). There are many grandchildren, great grandchildren and nieces and nephews who will remember her well.

The family of Mildred McHenry created this Life Tributes page to make it easy to share your memories.

Mildred “Mil” McHenry left this earthly realm and returned to...

Send flowers to the McHenry family.