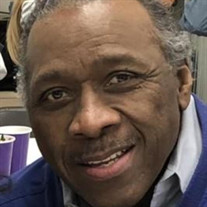 Ronald Eugene Bailey (Ron), 76 of West Chester, Ohio passed away on Wednesday, December 30, 2020. Ron enjoyed nurturing his faith, reading books, golfing, and spending time with family and friends. He loved meeting and building relationships with new people and was always willing to help, listen, as well as advise. Ron was born on December 26, 1944, in Fort Worth, Texas to Raymond and Allie Mae (Mack) Bailey. He graduated from M.L. Kirkpatrick High School in Fort Worth and received his Bachelor of Science degree in Education and a Masters in Business Administration from Texas Southern University in Houston. After graduating Ron moved to Cincinnati, Ohio where he was employed at General Motors, Pontiac Division. Due to his passion for education, he began a second career teaching middle school mathematics in the public school system. Ron was very active in his community coaching little league sports, mentoring, and tutoring. He was a faithful member of Mt. Zion Baptist in Woodlawn, Ohio where he served as an usher, trustee, and Deacon. He is survived by his wife, Gloria Bailey of 42 years, his children: Ronald Bailey Jr, Sean (Christine) Hodges, Jermaine (Janelle) Bailey; grandchildren: Jarron Bailey, Kameron Bailey, Brianna Hodges, Austin Hodges, Cameron Hodges, Kyndal Bailey, Korinne Bailey; brother: Gary (Delores) Bailey; sister: Seretha (Claude) Lofton and many nieces, nephews, extended family, and friends. He is preceded in death by his mother and father, and brothers Billy Ray and Everett Keith Bailey. His contagious smile, and laughter will be missed by those that loved him.

The family of Ronald Bailey created this Life Tributes page to make it easy to share your memories.

Send flowers to the Bailey family.