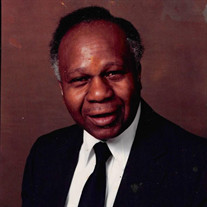 Solomon was born to the late Luther Lundy & Ida Bell Page Lundy. Solomon was the fifth child of six children. Solomon received his education in Cincinnati, Ohio. He graduated from Lockland Wayne High School, after graduation he joined the U.S. Airforce where he served 3 years during The Korean War Conflict. After returning from the service, he met the love of His Life, Ina Morris Lundy whom he called (Dear) which mean’s Dearest to His Heart. To this union 4 children where born, Michael, Sandra, Gregory and Johnathan. He later continued his education at the University of Cincinnati, Ohio for 1 year. He received the Lord in his life in 1960. His favorite song was Lord I’m Running Trying to Make A Hundred 99 and a Half Won’t Do. His favorite snack was Peanut Butter and graham crackers. He was preceded in death by his parents; Luther & Ida Bell Page Lundy; son, Jonathan Lundy; his daughter, Sandra Lundy; his siblings, Melvin Lundy, Luther Lundy Jr, Thomas Lundy, Mamie Ruth Wagner and Mary Ida Welch all of Cincinnati, Ohio. He leaves to cherish his memories to his wife Ina Lundy “Dear”; his two sons, Michael Lundy (Ann) of Ft. Petersburg, FL. and Gregory Lundy of Cincinnati, OH; five grandchildren; nineteen great grandchildren; seven great-great grandchildren; 1 sister-in-law, Willie May Cox of Brooklyn, NY; and a host of relatives, loved ones and friends. The Pastoral Leadership of Pastor Solomon Lundy with the help of his lovely wife, First Lady Mother Ina Lundy, has been so rewarding and a blessing to so many people during these 55 years. In April of 1964, he was ordained and installed to be the shepherd of a Branch Church by his father, the late Bishop and Overseer Luther Lundy Sr. During his 3rd week in office, he was saddened with the sudden death of one of his faithful Church Mothers. She was not sick, but Praise GOD, “She died while speaking in tongues,” he said excitedly. He was saddened further when a pastor friend, who was scheduled to help him with her Going Home Service, was rushed to the hospital with a sudden heart attack. Since then, the Words of Comfort, Strength and Soul Winning has been his chief focus in ministering. Pastor Lundy was President of the West End Development Corporation. This corporation was instrumental in working with retired State Representative Bill Mallory in building the Gateway Plaza Apartments. The building, built for low income citizens is located at the corner of 9th Street and Central Avenue in downtown Cincinnati. He also worked as a activist and spokesman with Communities United for Action to stop pollution at the Elda Landfill located in Winton Hills. The pollution was proven to be damaging to the health of low-income citizens in the area. On February 6, 1996, a decision was made by the Ohio State EPA to close the dump. Pastor Solomon Lundy has always been interested in visiting Inmates at the local Jails and State Prisons. He is always ready to pray for the sick and afflicted in the Church, Hospitals and Nursing Facilities. For 10 years, he worked as a Volunteer Chaplain, along side of the Chaplain at the Lewis Center (now called Summit Behavioral Healthcare)

Solomon was born to the late Luther Lundy & Ida Bell Page Lundy. Solomon was the fifth child of six children. Solomon received his education in Cincinnati, Ohio. He graduated from Lockland Wayne High School, after graduation he joined the... View Obituary & Service Information

The family of Bishop Solomon Lundy created this Life Tributes page to make it easy to share your memories.

Send flowers to the Lundy family.