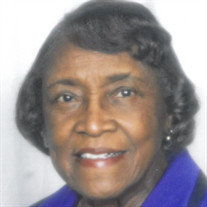 Susie M. Jones was born to parents Elizabeth (Nelson) Sanders and Thomas Sanders, on January 8, 1927. She passed away on April 26, 2021, at the Brookdale Assistant Living Community following a long illness at the age of 94. She was born in Uniontown Alabama and spent most of her childhood in Perry County. Her family were sharecroppers, but her mother wanted more for her daughter. When Susie was seven, her mother decided to leave the family farm and head to New Orleans, where she could work as a domestic. The years passed and like many other African Americans during this period, Elizabeth decided to move "north". To leave the segregation and poverty of the South they headed for Ohio when Susie was 16 years old. They settled in the West End community In Cincinnati and joined the New Hope Baptist Church, where Elizabeth snag in the choir. They used their skills and resources and eventually opened their own restaurant, which was later sold to a local minster. Susie met her first husband Steve L. Coaston, in Cincinnati's West End, where they both lived. His love and ambition matched hers. He had served as a U.S. Navy Seabee and would prove to be a devoted husband and father to their children Steve Junior, Kathi and Cynthia. They purchased a house in Evanston and were married for 12 years before a tragic accident resulted in Steve's death in 1954. Determined not to let her life circumstances define her, Susie enrolled in night school at Hughes High Adult "Knight" school, where she graduated with honours and was offered a scholarship to attend the University of Cincinnati. In her later years, she worked as a Teaching Assistant for Cincinnati Public Schools. Hughes Adult High School was also where she met Joshua Jones. A kind man with an accomplished life. He had served in the military and was a Deacon at the First Baptist Church of Walnut Hills. He was also A Prince Hall Mason. Their worlds joined and they were married in 1966. He was a loving husband and father to their daughter Carla and his three stepchildren. They lived and owned a home in College Hill until Joshua's passing in 2008. Susie faced - and overcame - many challenges but she never lost her zest for life. She loved dancing and she also loved the tranquility of working in her garden. She was a dedicated Eastern Star for more than 40 years. She was a charter member of the Golden Link Chapter number 91 and a member of the Heavenly Star chapter number 97. She was an Eastern Star worthy emeritus until the end. She is preceded in death by her half-sister, Fanny Mae (Sanders) Walker. She is survived by her children, Steve L Coaston Jr (Mary, wife) Kathi Coaston, Cynthia Coaston, Carla (Jones) Bugg (David, husband), Grandchildren; Leslie Young (Antonio, husband) Steve L. Coaston III, Tracie Coaston, Christopher Anderson, Tyler and Logan Bugg. Great grandchildren Loren and Austin Young. She is affectionally known as "Aunt Susie' to a host of Coaston and Jones nieces, nephews and cousins to the Nelson family.

Susie M. Jones was born to parents Elizabeth (Nelson) Sanders and Thomas Sanders, on January 8, 1927. She passed away on April 26, 2021, at the Brookdale Assistant Living Community following a long illness at the age of 94. She was born in... View Obituary & Service Information

The family of Susie Marion Jones created this Life Tributes page to make it easy to share your memories.

Send flowers to the Jones family.