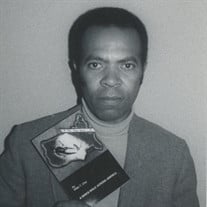 Birth name, Willie Terrell Clay, famous name Willie T. Clay. born July 30th or 31st (depending on which family member you ask) 1933 in Docena Alabama to Shelby and Genie-Mae Clay (Marshall). He took flight on May 12th, 2021, at 7:03pm, surrounded by his daughters, granddaughter and close friend of the family Michell. Willie found Christ at an early age affiliated with Revelation Missionary Baptist Church, Ohio. He attended several churches in Cincinnati and California. He became a Minister of Music in California for Church of Religious Science, Science of the Mind as a devout Christian. He grew up in Cincinnati Ohio and graduated from Woodward High school. He served in the Army during the Korean War from 1951 to 1955 as a Radio Operator. Yes Willie was talking even while the war was going on. In October of 1955 Willie married Bernice Williams. He received his BA in Marketing/Communications at the University of Cincinnati in 1960. Willie and his brother Solomon started an advertising/marketing company in 1960. Willie was a visionary and started the first part of his walk across America leaving from Cincinnati Ohio to Los Angeles California completing a national survey, if integration was working across America. In 1961 Willie and Bernice moved to California where they extended their family with the births of his son, Danny & their two daughters Pamela and Angela. Willie loved being involved in the community as a Director with Los Angeles City Teen Post and worked closely with Mayor Tom Bradley fighting for civil rights. In 1972 Willie and his children found the love of roller skating at Hollywood Skating rink which became his passion for the rest of his life. He was also an advocate tennis player, golfer, swimmer & chess player. In 1972 Willie finished his walk leaving from Harlem New York arriving in Cincinnati Ohio making him the FIRST MAN to walk across the United States. In 1974 Willie wrote The Big Walk which was a true chronicle of his journey. After 27 years of marriage Willie and Bernice decided to part ways and he moved to Cleveland Ohio and met Betty Smith and in 1986 T. Shelby Clay was born. Willie started the International Roller Skaters Association and at a young age Shelby was the spokes boy. They traveled extensively to different skating rinks around the country and to this day Shelby is an avid roller skater. In 1998 he was summoned back to California by his daughters to help with the care of Bernice who was terminally ill from cancer. Even though they had been divorced for over 15 years he took care of her till her last breath on June 2, 1999. He returned to Cleveland for another 11 years and came back to California permanently in June 2010 and helped Pamela with Living Advantage, Inc. foster youth group homes. He started writing a screenplay for The Big Walk movie which James Earl Jones and Bill Cosby wanted to play the main, but Willie did not want to sell his rights to a white film company. He continued skating, playing chess, and talking politics. In 2013 at the age of 80 Willie had back surgery which caused skating to be more difficult but that did not mean he didn’t skate. His health soon began to decline. Pamela did all she could to keep him motivated but God is the ruler of all rulers and called him Home. Willie is preceded in death by: his father Shelby, his mother Genie Mae, stepfather Percy Sr, his wife, Bernice, brother Solomon and sisters Christine (Peaches), Evelyn (Baby Sis) and Estella (Auntie). Willie leaves to cherish, brothers Clarence Clay and Percy Marshall Jr; sisters Betty Jean Collins and Bobbi Grevious; children Danny, Pamela, Angela and Shelby; grandchildren Dominique, William and Devery and a host of nieces, nephews and hundreds of cousins and his skating family from Arlington Skating rink, Hollywood Skating rink, Rosecrans Skating rink, World on Wheels Skating rink, Skate Depot Skating rink, and the skating rinks in Cincinnati, Cleveland and all over the United States. He was a father and teacher to sooooo many. Dad you will be missed, truly always loved and longing to see you again.

The family of Willie T. Clay created this Life Tributes page to make it easy to share your memories.

Send flowers to the Clay family.