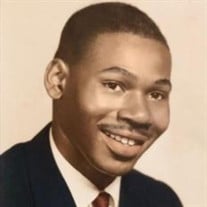 Willie Webster Jr, better known by family as “June,” was born on July 18, 1941 in Cincinnati, Ohio. He was the son of the late Willie B. Webster Sr. and Elizabeth Cook Webster. At the age of 4, Willie's mother passed away and Willie was raised by the late Eddie Mae Webster, Willie Sr.’s second wife. Willie attended Hughes High School where he ran track. Outside of school, Willie played baseball for the neighborhood team. After graduating high school, Willie worked in the warehousing area of the regional distribution facility at Shillito’s Department Store. He retired as a warehouse supervisor from Macy’s (formerly known as Shillito’s). Willie also worked at HR Block as a tax preparer. He loved working with numbers and preparing taxes for individuals. He retired from HR Block after serving over 30 years. As an adult, he was an avid bid whist player and a self-taught pastry chef. He greatly enjoyed baking cakes for loved ones, especially for the holidays and various celebratory events. Willie took resident in Bond Hill where he and his late wife Mildred Webster raised their two children, Geoffrey (Julie) and Janee’. Willie leaves to cherish his memories his children, his grandchildren Malik, Maiya, Charmaine, and Alon, his siblings Charles (Geneva), Gloria, Gregory (Brenda), Brenda, Janet (Donald Jackson), Deborah, and Cheryl. Two other siblings preceded Willie in death: Patricia (Gregory McKenzie) and Michael. Willie also leaves a very close cousin Jacqueline Covington and a host of numerous nieces, nephews, cousins, other relatives plus numerous friends to remember him always. Willie was somewhat a private person, but he would do anything for his family and friends. He died during a year of chaos, but we can rest assured that Willie was truly loved by many. No more suffering June, you will be missed by all. We have Endless Love for You!

Willie Webster Jr, better known by family as &#8220;June,&#8221; was born on July 18, 1941 in Cincinnati, Ohio. He was the son of the late Willie B. Webster Sr. and Elizabeth Cook Webster. At the age of 4, Willie's mother passed away and Willie... View Obituary & Service Information

The family of Willie Webster Jr. created this Life Tributes page to make it easy to share your memories.

Send flowers to the Webster family.